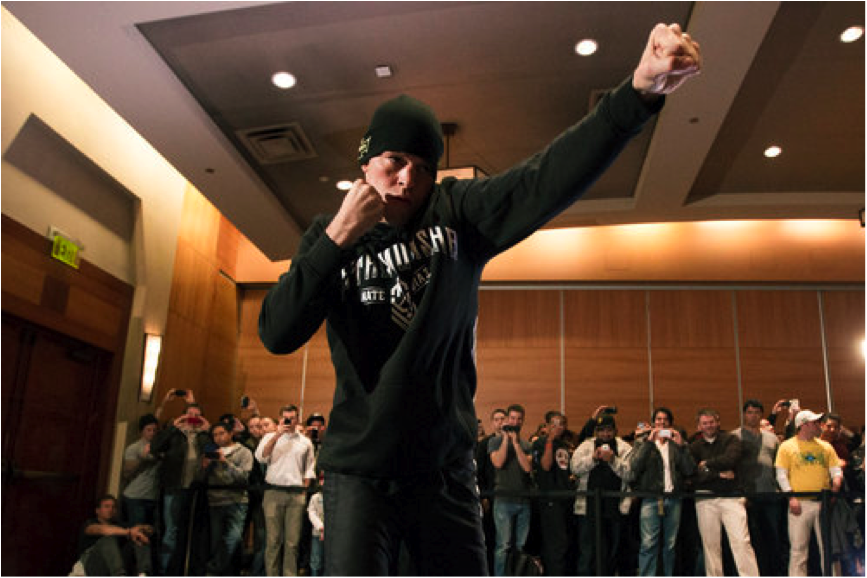 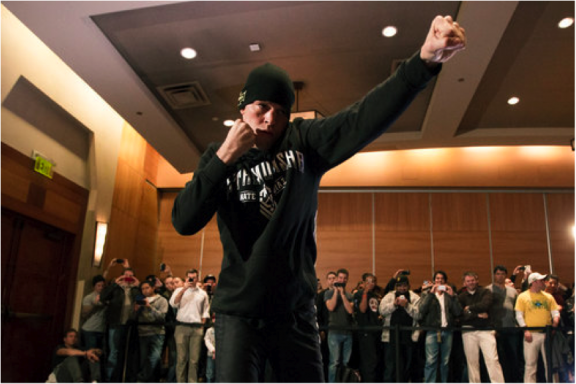 He may have been proclaimed the winner of The Ultimate Fighter Season 5, but Nate Diaz is now facing the wrath of fans and his own organization following his controversial tweeting.

On May 16th Diaz, a UFC fighter competing in the lightweight division and ranked seventh in the world, posted the following tweet to his official twitter page: 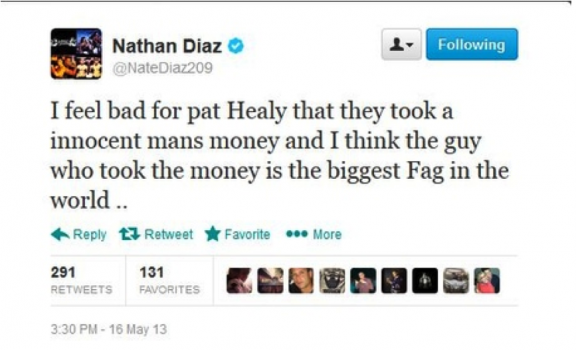 It is believed that the tweet was posted in defense of Diaz’s friend, lightweight Pat Healy, who was stripped of his bonus money after a drug test at UFC 159, which came back positive for marijuana usage. The ‘guy who took the money’ is believed to be bantamweight Bryan Caraway, who was recently awarded the submission of the night bonus.

The UFC acted immediately, suspending Diaz pending a full investigation. In an interview with MMA Fighting, UFC President Dana White said, “We are going to fine, suspend or cut him. One or two of these things will happen”.

On Friday May 17th, White made good on his promise, suspending Diaz for 90 days, and fining him $20,000  for violating the organization’s fighter code of conduct. In a recently released statement, the UFC said “the language used in the tweet was regrettable, offensive, and inconsistent with the values and culture of the organization, and is not tolerated.”

However the penalties didn’t seem to resonate with Diaz as he again took to Twitter on May 18th to direct the following message at Haraway:

Diaz’s suspension is just the latest in a long line of suspensions for controversial comments on social media platforms. In 2011, the UFC released bantamweight Miguel Torres for tweeting a joke making light of rape, although the organisation later reinstated the fighter after he apologised. Earlier this year they suspended and fined heavyweight Matt Mitrione for comments he made towards transgender fighter Fallon Fox.

Social media platforms have been important to the growth and consolidation of the UFC. Dana White is himself a keen Twitter user, utilizing the platform to engage with fans and promote upcoming UFC competitions. He has stated that fighters are entitled to their own opinions, but that they are subject to the consequences of the words they use.

Diaz’s suspension should act as a lesson for other fighters to think before they tweet!