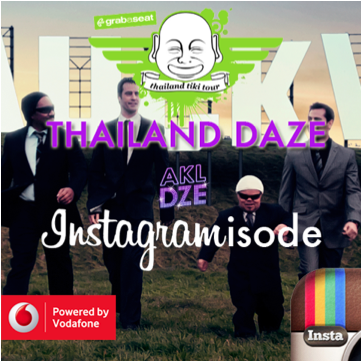 Pop Culture Musings – Auckland Daze travel to Thailand for the first ever, Instagramisode? 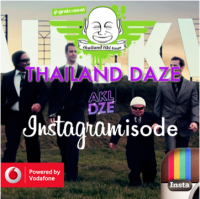 Auckland Daze, the cult TV show, which began its life on TVNZ OnDemand as a web series is now on its way to being the first ever Instagram television episode thanks to their ‘Instavideo ‘feature.

Following the misadventures of four wannabe entertainers in Auckland; male model Millen, dwarf entertainer Jimmy, who has a drinking problem, unfunny comedian Fasitua, and stuntman/ninja Glen, was an instant cult hit when it premiered as an OnDemand web series in 2011. Now thanks to GrabASeat, the guys are heading to Thailand for Thailand Daze, a five-day escapade that will be filmed through Instagram’s ‘Instavideo’ function, with help from Vodafone.

With a tight schedule interfering with their creativity, the production team including director Kiel McNaughton, and producer Kerry Wakia were looking for something different to capture the guy’s adventures. “We were going to do six second Vine clips, but luckily Instagram released their fifteen second video ability Instavideo on Friday, and we thought hey why don’t we just make an Instagramisode, which is the Thailand special, and it can be released in fifteen second bits” said Wakia.

The prospect of the series being the first ever Instagramisode was very exciting for the production team. “We didn’t want anyone to beat us to the finish line so we started up right away, and it was great because it fits in with our story, it fits in with our style” said Wakia. The Thailand Daze special will be recorded by the guys exclusively on mobile phones, and made available instantly with Vodafone’s Data Angel Oversea’s roaming service.

Thailand Daze will focus on Millen, and Glen, while Fasitua, and Jimmy are still back in New Zealand, but will be included in the show via digital applications such as Skype.

Wakia said the guys were “ridiculously excited” to be going to Thailand, and that there excursion fits in nicely the series continuity. As she said “After season one the boys are in a bit of a slump, so they go to Thailand!”

While details of Thailand Daze are being kept under wraps, and will unfold in real time, it is known that actress Kimberly Crossman is involved in the beginning of the episode, and that the boys are keen to visit the real locations used in the filming of the Leonardo DiCaprio film “The Beach”. Wakia reminded audiences “to expect shenanigans.”

The prospect of Instagram’s “Instavideo” is very exciting for the cast and crew of Auckland Daze, and if this first initial episode is successful, the production team would definitely like to use it again.

“We’ve all got ideas for shows, and I guess the thing is the great thing about the Instagramisode is that we don’t need a big massive crew. Its fantastic that Vodafone has jumped on board with it as well, so there providing all the data, which is great for us. What we love about it is just the instant satisfaction of getting it out there. I think it’s a great way to be creative, and make stuff that you want to make, and the fact that you’re the master of your own content you don’t have to wait for ten people to approve it”, said Wakia.

Audiences can tune into the Thailand Daze episode as it unfolds, by following AKLDZE on Instagram. While series two of Auckland Daze will be going straight to air at a later day.

iTunes: the gift that keeps on giving Previous post
It’s ski season! - Get your App on! Next post