It’s been 1 month since Apple launched their official Instagram. The tech giant racked up 20,000 followers in the first 40 minutes and in a month has grown to 823,000 followers!

With existing Instagram accounts for several other products including iBooks, Apple Music and other apps, there was speculation that Apple may have left it too late joining Instagram, however, at this early stage, it’s looking like a good move after all.

It’s common that when a social platform first starts gaining traction, almost everyone makes a few fumbles while learning how to best utilise the site. Looking back on some of your first posts can make you want to cringe. We’ve all archived some less-than-ideal shots from our beginnings, but no shame! It’s part of the process everyone goes through when learning how to manoeuvre a new platform. Apple’s delayed Instagram release means that they skipped all of this! In some way, it seems unfair – like how teenagers seem to be skipping the ‘ugly kid’ stage of puberty! But it’s good for Apple, it means they’re killing it from the get-go.

The account is currently posting images and galleries taken by various photographers using iOS equipment. In the description, they include quotes by the photographers of the featured photo and the Instagram handles of the photographers – giving them additional exposure. Apple is inviting users to share their own iPhone photography on Instagram using the #ShotoniPhone hashtag. 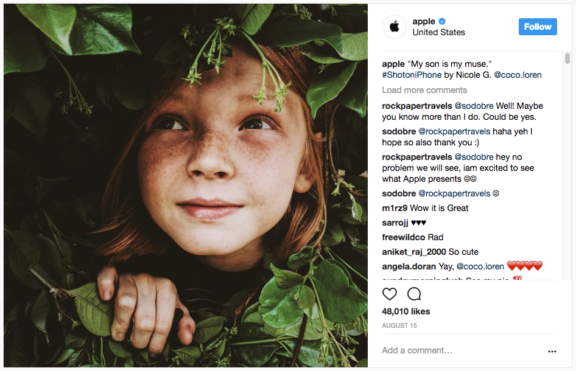 Utilising Stories, Boomerangs and galleries, the Apple Insta-handle has very quickly become a well-rounded account. According to Mashable, Apple has made it clear that they want to continue to keep the account curated and free of clutter (ads). Cutting out the noise from ads celebrates the Apple community, who already buy – and love – Apple products, making the account a place to see what people can create with them.

Apple has a reputation for being slow to take up social media, but it looks like the considerations around each decision have been given a lot of thought and care. The introduction to Instagram definitely looked well-considered and smooth. Despite joining Twitter in 2011, @Apple is yet to kick off on the platform. Who knows, maybe that’s next for Apple???