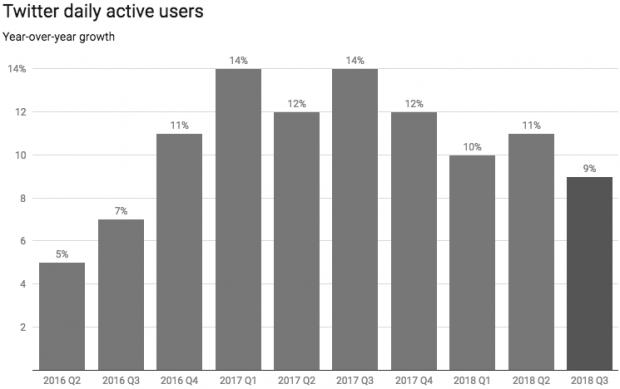 Whether it’s the latest news or the latest meme, Twitter consistently punches above its weight in our cultural consciousness. And it’s an important space for brands to make an impression on potential customers. We’ve gone ahead and compiled all the Twitter statistics that you need to know to market among the microbloggers in 2019.

Yes, this official number is impressive, but let us please note it was first announced in 2014 and hasn’t changed in the years since.

It wasn’t til Q3 2017 that Twitter posted its first profit: 91 million dollars. And according to analysts, that was based more on cost-cutting (in sales, marketing and R&D) than business growth.

However, Twitter has been consistently profitable for the last four quarters, and it posted its largest profit ever in Q3 2018. The stock market likes this bump: Twitter was #21 on Forbes’ Top 100 Digital Companies list for 2018 (beating out Facebook at #26).

3. The most popular emoji on Twitter in 2018 was the laugh-cry face

What better way to celebrate #WorldEmojiDay than with some ????✨data✨?????

(Okay, you didn’t really need to know that. But you wanted to.)

5. 9% more people are using Twitter on a daily basis

While monthly users decrease, the number of daily users has been increasing consistently since 2016.

This lines up with Pew Research’s finding that 46 percent of American Twitter users visit the site at least once a day.

CEO Jack Dorsey stated that Twitter is focussing on making the platform “a healthier and valuable everyday service.” If these numbers reflect Twitter’s goal to be more attractive to good users while booting bad ones, they may translate to higher-quality audiences for advertisers.

259 million of those 326 are international users. Twitter supports these users with 35 offices around the world, and the platform operates in 33 languages. (34 if you count emoji.)

Additionally, Twitter actively supports uptake in the developing world via Twitter Lite, the app’s data-friendly alternative. Twitter Lite is available in more than 45 countries, and this dedication to growing new markets has translated to increased international revenue growth for Twitter.

Of those adults, Twitter users tend to skew urban, educated, and higher-income. 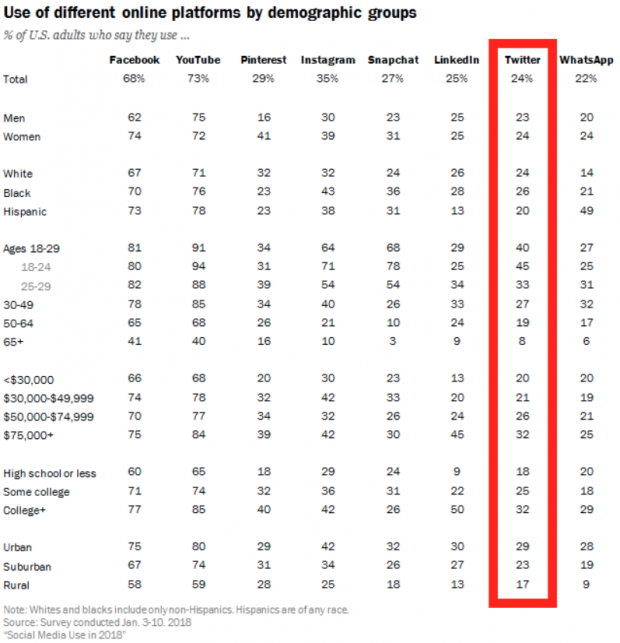 For more detail, check out our comprehensive breakdown of Twitter’s demographics.

8. User growth is predicted at less than 1%, in the US

Emarketer predicts that Twitter will only add 500,000 American users in 2019. Most of the new users will be adults over the age of 25.

9. Only 6% of US teens say Twitter is the most important social network 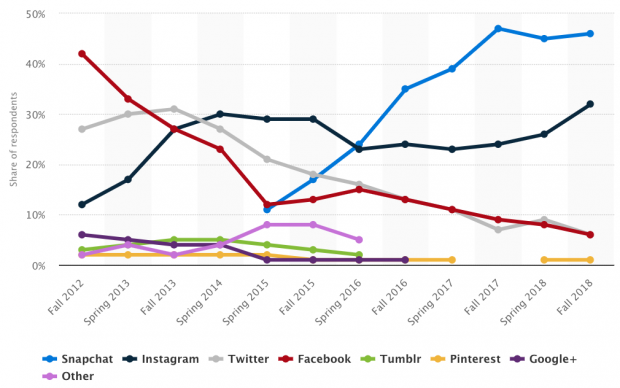 That’s what Twitter says, anyway. This number lines up with what we know about the platform’s general demographics. 45 percent of American 18- to 25-year-olds say they use Twitter, for instance.

But does it line up with the fact that the most retweeted tweet of all time is a plea for free chicken nuggets?

And, according to the same study by Pew Research, that works out to 12 percent of all Americans. No other platform rivals Twitter for bleeding-edge news and up-to-the-second happenings.

This relevance is quite possibly the reason Twitter continues to be such a major player in the social media landscape, despite size and reach. After all, Twitter invented the hashtag, and live-tweeting. (And Vine. RIP Vine. Never forget.)

12. Twitter is the number one platform for government leaders

And in related news that is surprising to no one, Twitter is politically polarized. But since outrage is the most viral emotion on the internet, at least marketers can count on Twitter users being engaged. Just keep the relatively volatile nature of this environment in mind as you build your Twitter marketing strategy.

13. People are 31% more likely to recall what they saw on Twitter

This, as opposed to what they recall while browsing online in general.

Apparently, Twitter maintains a special place in its users’ hearts and minds. Or is it just that pithy content is stickier? Regardless, this is a notable lift that’s worth capitalizing on. 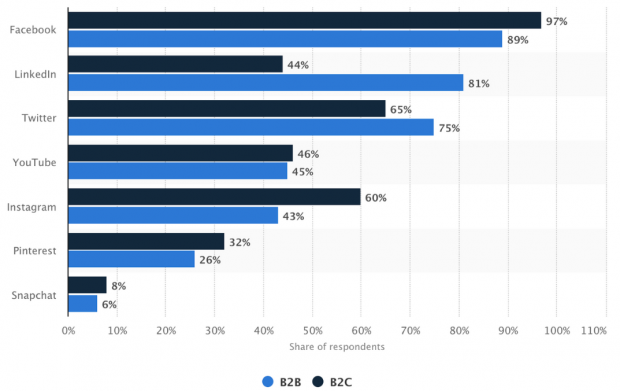 One of the top reasons businesses feel they need to be on Twitter is customer service. It’s almost de rigueur now to @ your airline about every twenty-minute flight delay.

However, smaller brands can also jump on the opportunity to turn frowns upside down.

16. Only 3% of customers will @ you when they complain

According to Edison Research, brands need to put in some legwork and broaden their Twitter customer service horizons.

Check out our full guide to social listening here. Or, if you haven’t already, demo the sentiment analysis tools from Hootsuite Insights.

As of their Q3 2018 conference call, ad engagements on Twitter continue to rise. If Twitter’s ROI wasn’t competitive last year for your industry and audience, it may well be now.

18. Twitter also saw a 14% decline in cost per engagement over the same period

More effective at “stimulating mental engagement,” to be precise. (And 9 percent better at memory encoding). This is according to a NeuroInsight study that also found people spend 4 percent more time on Twitter during a live event than they would normally.

Take, for instance, the 4.8 billion Tweet impressions during Superbowl LII last year, most of which—I can only assume—was everyone looking at pictures of Nick Foles holding his baby.

More than any other platform, Twitter lives for major events. That kind of predictable surge in interest is worth experimenting with in your paid strategy.

20. 40% of users say they’ve made a purchase because of an influencer’s tweet

Twitter is an indispensible platform for many experts and thought leaders, not to mention comedians. Have you considered complementing your traditional ads with a well-placed shout-out from the right voice?

In other words, a tweet gets half its interactions in the first half hour, and then starts a long, slow decline into the fog of time.

This is why some guides don’t have upward limits on the number of times a brand ought to tweet in a day.

22. Brands tweeted an average of 122 times a month last year 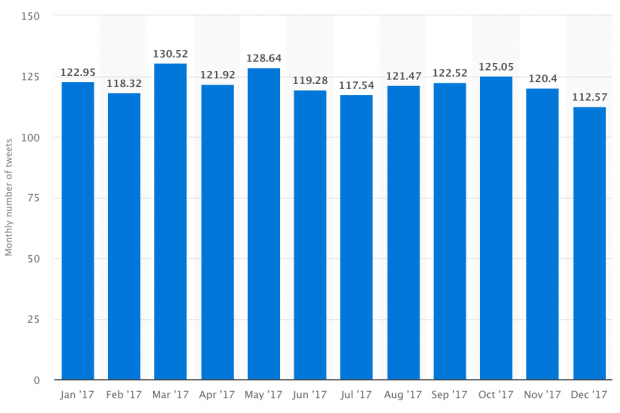 What does that work out to, four tweets a day? Six per workday?

Although, we hope they aren’t only tweeting on workdays. A better idea: schedule your tweets in advance to catch your audience when they’re online and engaged.

In our studies we’ve found that engagement on Twitter peaks around mid-afternoon, if you’re a B2B brand.

B2C brands might have even better results scheduling around working hours. (Think commutes and lunch hours.)

That said, check out your audience’s habits using Hootsuite Analytics if you want to fine-tune your timing.

Twitter studied 3.7 million accounts in order to reach this, the conclusion everyone already knew.

But it’s nice to know the exact percentage, right guys?

This statistic from Twitter’s internal data is a good reminder that video content needs to be equally effective whether or not users have their sound on.

In fact, mobile optimization across the board is a good bet: short, punchy, and vertical.

26. Tweets with video attract 10x as much engagement

We’re all still smarting from Facebook’s (um, alleged) inflation of video views, but this is a pretty compelling number. If you haven’t brought your video assets to Twitter yet, now is the time.

27. Promoted tweets with video saved 50% on their cost per engagement

Since Twitter Business is the one who came up with this statistic, it feels almost like they’re announcing a discount. However, it could make for an easy ROI lift for those of you with spare video content in your back pockets.

According to Nielsen Brand Effect’s data, these ads are performing effectively for their brands and are worth considering if you’re looking for a new tool to reach your audience. 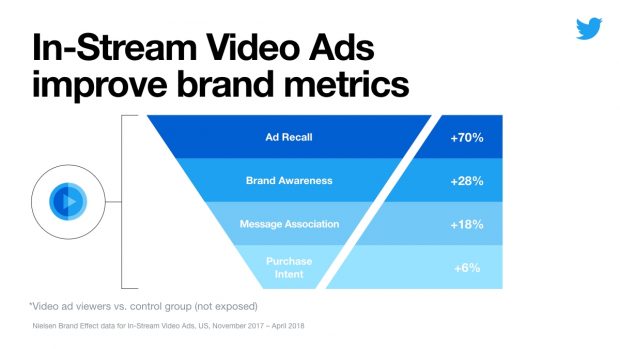 Save time managing your Twitter presence by using Hootsuite to share video, schedule posts, and monitor your efforts. Try it free today.