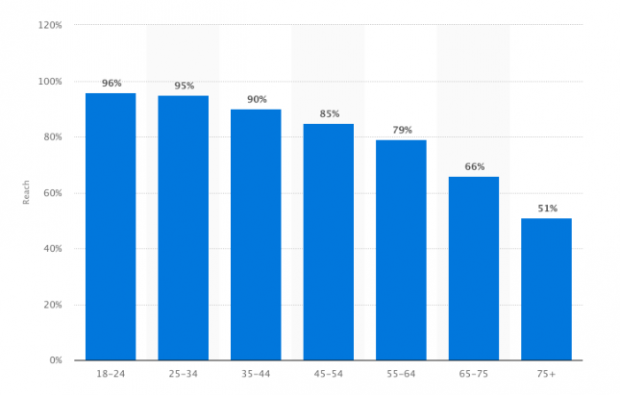 If the internet is a galaxy of strange worlds, then YouTube is one of the biggest by population and popularity. But it’s not exactly like other social platforms, or search engines, or video providers—though it could be mistaken for any one of them.

We’ve compiled this round-up of the latest YouTube statistics to help you own your place on the platform—whether you’re managing a channel as part of your brand’s YouTube marketing strategy, or fine-tuning a crescendo of perfectly-placed bumper ads.

Bonus: Download a free guide that reveals the exact steps one entrepreneur took to gain more than 23,000,000 views on YouTube with no budget and no expensive gear.

That’s half the internet. And every day, they watch a billion hours of video.

(For context, Cisco predicts that video will be 82 percent of all internet traffic by 2022.)

Essentially every Gen Zer with an internet connection is on the platform. This is not so surprising, given that historically YouTube has been very, very free.

3. Half of American internet users aged 75 and over use YouTube

YouTube’s low barrier to entry also makes it attractive to the analog generations. These folks might not see the point of a Spotify Premium account, or even a Facebook account, but free, on-demand Beach Boys concert footage is right up their alley.

For your reference, this is the percentage of every American age demographic using YouTube, as of January 2018:

(And yes, these numbers are better than Facebook’s.).

And has local versions in 91 different countries, meaning it reaches 95 percent of the internet, worldwide.

We can always count on YouTube’s parent company Alphabet to not miss any opportunities to be ubiquitous. It’s no surprise that YouTube likes to keep its potential reach as high as possible.

5. Only 15.8 percent of YouTube’s visitors are American

Americans visit the site in the largest numbers, followed by residents of India, Japan, Russia and China.

On average, people spend eight minutes and 41 seconds each day on YouTube.

Relatedly, this report also found that “youtube” was the second most popular search term in 2017, according to Google. (The number one spot went to Facebook.)

Entertainment and information have transcended the couch. (Although, given the rise of smart TVs, they may also return to the couch.)

Still, much of YouTube’s value is its portability: your audience might be coping with their commute using a meditation video, or panicking because their mom’s car’s battery is dead.

Wherever your audience needs you, like Mariah Carey, you’ll be there.

According to Apple, YouTube rose from third spot in 2017 to first spot in 2018. It beat out Snapchat and Facebook as the free app with the most downloads of the year.

Meanwhile, YouTube sits at third for Android by reach, according to Statista.

9. YouTube reaches more American 18- to 34-year-olds than any TV network

And that doesn’t even include browser views, just mobile.

For context: as of mid-2018, traditional TV only reaches 76 percent of people in that age range, according to Nielsen.

Meanwhile, 46 percent of millennials are increasing their usage.

If you’ve been losing sleep wondering which social network to invest in to reach the cool kids, YouTube might be the non-network to bet on. 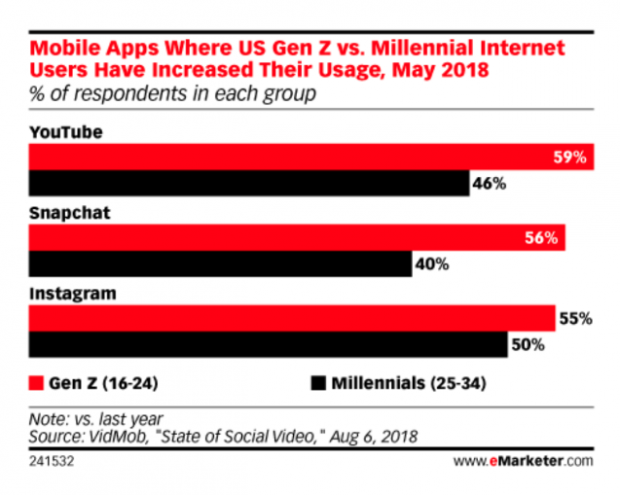 On-demand music streaming (Spotify, Apple Music, et cetera) is how 86 percent of consumers listened to music in 2018. And YouTube was responsible for providing 47 percent of that music content.

While these numbers speak to YouTube’s huge attractiveness to audiences, the music industry is maybe a little less excited about it:

YouTube’s 2018 launch of YouTube Music Premium could be seen as a music-industry-friendly rival to Spotify. Or, you know, a bid to get people to buy the cow when they’ve been getting the milk for free. Or at least pay the cow a reasonable monthly fee?

What remains to be seen is how the introduction of the “new” subscription model (YouTube Red is dead, long live YouTube Premium) will affect advertisers. So far, seems like the plan might be to frustrate listeners into paying by programming a lot of ads.

12. Relaxation videos are up 70 percent

Speaking of frustration: between July 2017 and June 2018, YouTube reports that yoga, meditation, and slime ASMR videos—in fact any video related to “relaxing”— have been trending.

The hot new consumer trend is simplifying, decluttering, and relaxing.

On the other hand, 1.3 million people have taken their frustration in another direction by watching this guy make fun of bad YouTube ads.

13. 70 percent of millennial YouTube users watched a video to learn how to do something new last year

According to YouTube CEO Susan Wojcicki, millions of people turn to YouTube to learn. Google announced in October 2018 that it’s investing 20 million into its YouTube Learning initiative, which will pay creators like The Verge and TED-Ed and John Green’s brother to make even more educational content—explainers, how tos, lectures, et cetera—than they already do.

If your brand has knowledge that it’s burning to share with the world, YouTube is saying that now is the time to start packaging it and sending it out.

With YouTube growing its own species of celebrity, the potential for non-traditional marketing with macro- or micro-influencers also expands. And that’s on top of potential audience reach.

When it comes to influence, it might be worth examining if or how your brand can lock in on the rising tsunami of gaming culture.

According to YouTube, members of the gaming community turn to YouTube videos to feel less lonely, to unwind from gaming, and to improve their craft.

That’s in the last two years on mobile alone. Whether they’re window shopping or in the final stages of product comparison, consumers are turning to video to figure out what they want to consume.

YouTube also says that three times as many people would prefer to watch a YouTube video than read an instruction manual, meaning your YouTube audience may be sliding through the sales funnel straight into the welcoming embrace of customer care.

The more information your brand can provide about your products and services on YouTube, the happier your customers are.

17. Since 2016, twice as many small- and medium-sized businesses are advertising on YouTube

For more on the nitty-gritty, check out our ultimate guide to advertising on YouTube.

18. LEGO has almost twice as many views as any other brand on YouTube

With 7 million subscribers, LEGO’s YouTube channel is killing it with both original content (or semi-original: LEGO Star Wars? How about LEGO Disney Princesses?) and user-generated content. (FYI: AFOL stands for “adult fan of LEGO.”)

LEGO operates channels in multiple languages to broaden their reach. They also work with their rabid fan base (even their fan channels have hundreds of thousands of subscribers) to capitalize on existing engagement levels. 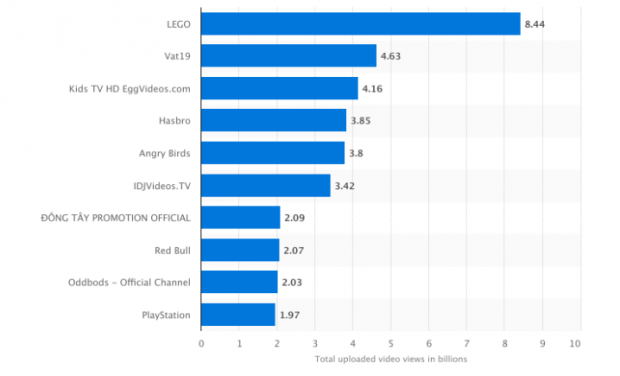 This is a startling amount, given that TV ads average around 45 percent.

Google commissioned Ipsos Reid to study how people watch (or ignore) ads, and they concluded that TV commercials last for so long that the audience just… walks away. Good break activities include: using the washroom, letting the dog in/out, concocting a snack, or speaking to a human being.

Oh, and watching YouTube. 80 percent of sports fans switch between TV and a second screen while watching live games, and we all know they aren’t the only ones multi-tasking.

For comparison: 15 percent of Facebook video ads are audible.

When ads are audible and viewable, Google documents a sizeable lift in brand awareness, ad recall, and consideration. 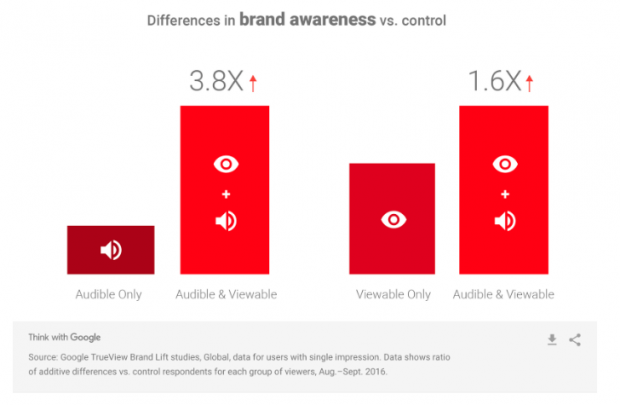 And 73 percent of that income came from American video ads, specifically, according to eMarketer.

22. YouTube doubled the number of pre-roll ads it shows

As of November 2018, YouTube is feeding audiences “ad pods”: two commercials per break at the beginning and/or middle of a video. This will initially apply only to browser viewing, but will be rolled out to mobile in 2019.

But what about that Ipsos Reid TV ad study that Google commissioned? Didn’t they find that the amount of TV ads annoyed 73 percent of viewers?

And with 39 percent of media consumers saying they’re willing to pay for ad-free content, should marketers be concerned that we’re setting ourselves up for a backlash against digital video advertising?

It remains to be seen. But one thing will stay the same for your YouTube marketing strategy in the coming year: quality is the only way to rise above the noise.

Grow your YouTube audience faster with Hootsuite. From one dashboard, you can manage and schedule YouTube videos alongside content from all your other social channels. Try it free today.