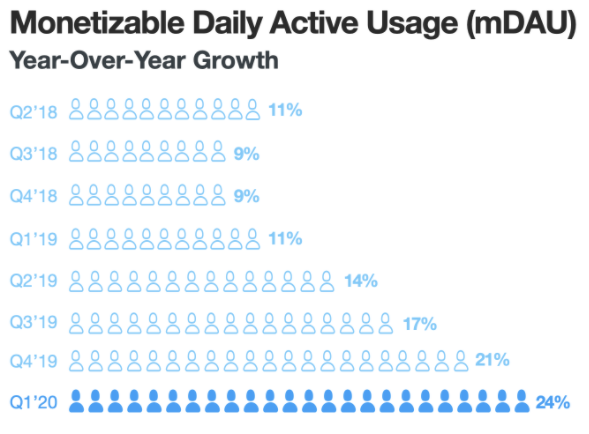 Social media demographics change constantly. And Twitter demographics are no different. Facebook started as a college-only site. Now seniors are its fastest growing age range. Most TikTok stars may be teens, but grandmas are making moves, too.

So what about Twitter? In short, the Twitter population is younger, wealthier, and more educated than the average American. But the results are different outside the United States.

Get to know who’s on the platform to improve your Twitter marketing efforts. With knowledge of global Twitter user demographics you’ll have a clearer picture of who your brand can reach here.

As of the first quarter of 2020, Twitter has 166 million monetizable daily active users (mDAUs). Twitter defines mDAUs as “people, organizations, and other organizations… that are able to show ads.”

This represents a 24% growth from the previous year, the highest year-over-year increase on record. Twitter credits this growth to product improvements and online chatter about the COVID-19 pandemic.

This makes Twitter the 13th most used social media platform, with some 340 million users. Because Twitter does not publish general monthly active user data (MAU), this figure is based on the platform’s advertising audience reach. 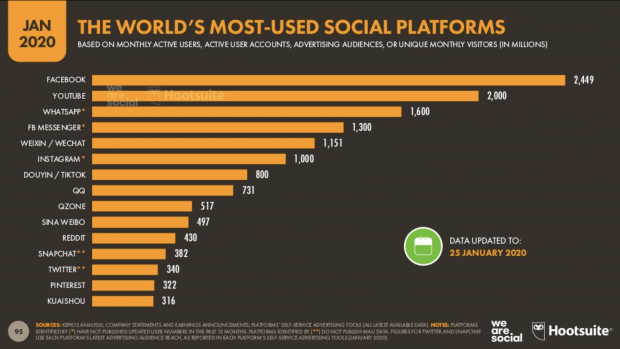 In the United States, 80% of tweets are created by just 10% of users. Findings from Pew Research Center show that the average U.S. adult posts twice and favorites one tweet per month, follows 89 accounts, and has 29 followers. Some 13% of adults in the U.S. keep their accounts private. 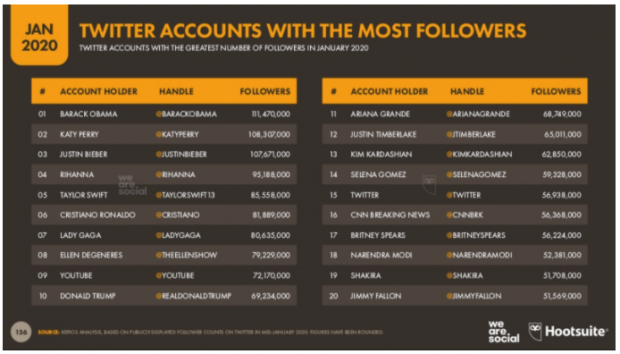 Read our report, The Global State of Digital 2020, for a comprehensive look at social media statistics. Or hone in on Twitter with these statistics.

Where do Twitter users reside? More than 80% of the platform’s mDAUs live outside of the United States. This is fairly consistent with other major social networks.

But with 33 million mDAUs, the United States is the site’s largest active audience. This holds true for ad audiences as well. The United States represents the largest population in terms of ad reach, followed by Japan, the United Kingdom, Saudi Arabia, and Brazil. 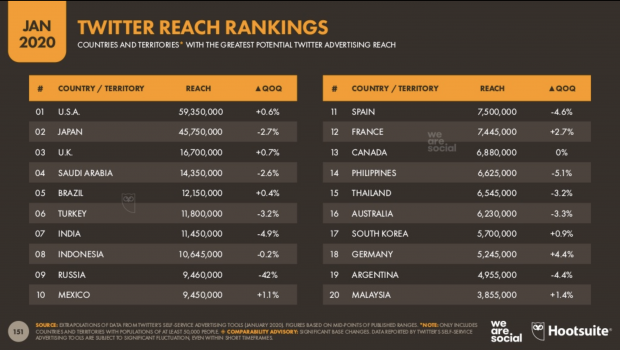 What age group is Twitter most popular with? Millennials came of age with Twitter. So, unsurprisingly, they’re the generation that’s still the most active on the platform. 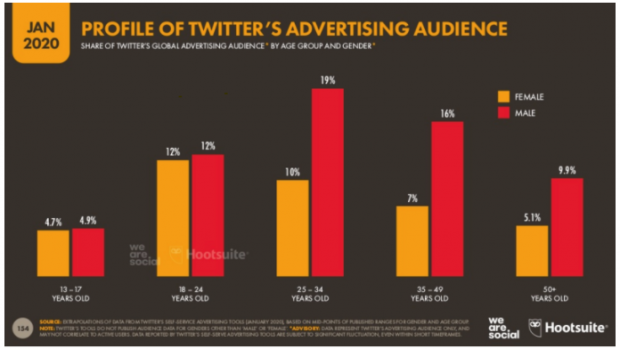 Twitter’s global audience skews male. According to its advertising audience data, the worldwide gender split is 62% male and 38% female. 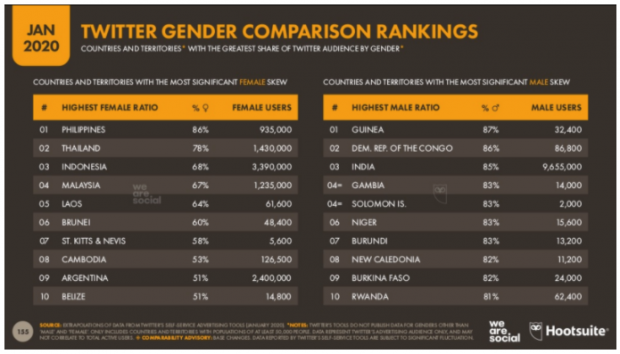 How much money do people on Twitter make on average? The answer is “above average”—at least in the United States. Pew Research Center data finds that Twitter users make 9% more than the average American.

Twitter’s income demographics are pretty standard for most social networks, which typically count higher shares of higher earners among their ranks.

Along with higher income, people on Twitter have above average credentials when it comes to education.

In the United States, 42% of Twitter users have at least a bachelor’s degree, compared with 31% of the general public. The majority of U.S. adults on Twitter users describe themselves as high school graduates. But since most are young, many may still have college degrees in their sights. 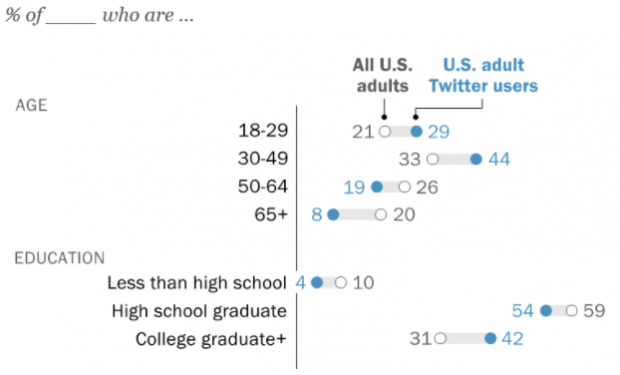 The gap between high school and post-secondary educated users is a little more pronounced on Twitter versus other platforms (excluding LinkedIn). Most sites have a somewhat even spread of education levels. But Twitter has a markedly higher number of users who went beyond a bachelor’s degree than those in the college or high school tiers. 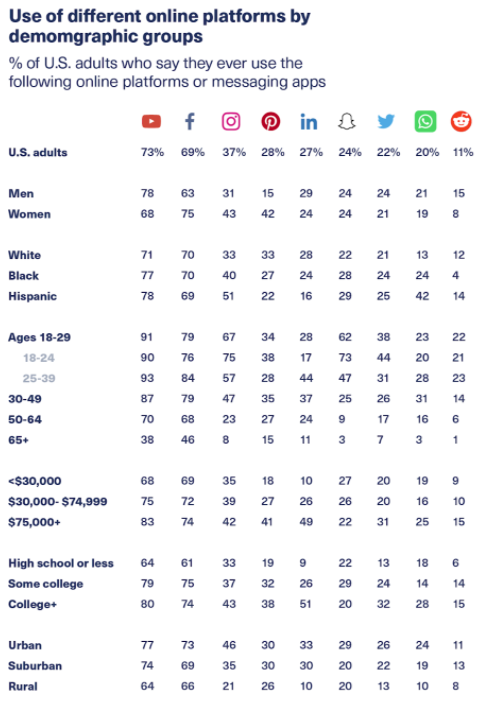 Is Twitter more popular with certain ethnic groups? Not really, at least in the United States.

The number of people who identify as white, black, and Hispanic are pretty evenly distributed. The Pew Research study breakdown is as follows:

Percentage of U.S. adults who say they use Twitter:

Not all social and messaging platforms have an even ethnic makeup. For example, on Whatsapp. Hispanics noticeably outnumber all other groups. According to eMarketer, there are 10 million more US Hispanics on WhatsApp than Instagram, and almost three times more than Twitter. 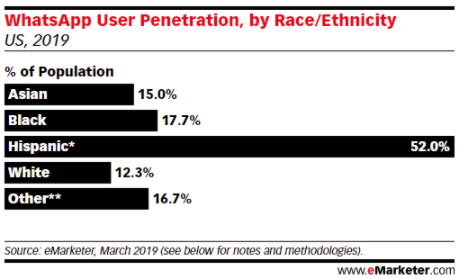 Which way do Twitter users lean politically? According to a Pew Research Center study, Americans on Twitter are more likely to identify as Democrats compared with the average American.

More than that, self-described Democrats on Twitter tend to be more liberal and less compromising than average. 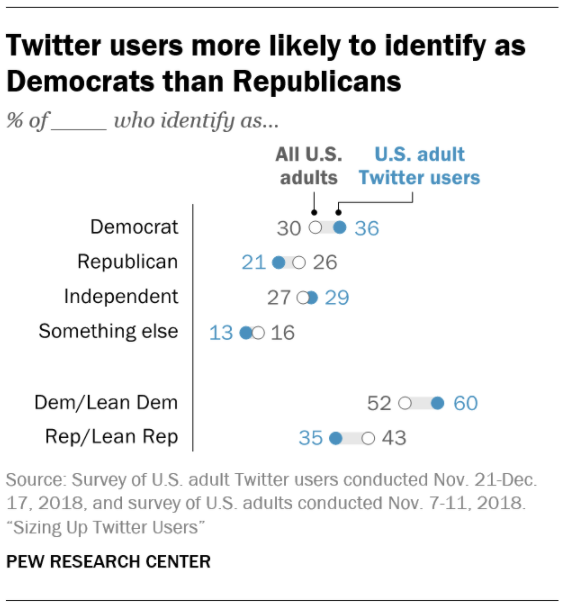 Along the same lines, Twitter users are more likely to say that black people are treated less fairly than white people, and that immigrants strengthen the United States, than the general public.

It’s worthwhile for brands to stay on top of the Twitter conversation. Twitter research finds that 93% of users are open to brands joining in, if done “the right way.”

Save time managing your Twitter presence by using Hootsuite to expand your audience, provide timely customer support, and monitor your efforts. Try it free today.

Brand Monitoring 101: Tips and Tools for Tracking What People Think of You

How to Use LinkedIn for Business: A Step-by-Step Guide for Marketers

YouTube Hacks: 21 Tricks and Features You Probably Didn’t Know About