Oppo – the new kids on the block in smartphones

Samantha ChalmersSeptember 13, 2017Comments Off on Oppo – the new kids on the block in smartphones0445

If you haven’t yet heard of Oppo (or even if you have) I’ve got some interesting news about the Chinese smartphone brand that is taking the market by a storm!

It’s worth noting that Oppo is a relatively new brand (given its launch into the New Zealand market was March this year), and the company has only been in the smartphone game since 2008. So it’s pretty impressive for the under-10-year-old company to be maintaining the 4th  position in the global smartphone market, sitting behind the big players of Samsung, Apple, and Huawei. It also took out the 3rd and 4th places in Counterpoints Top 10 Most Popular Smartphones in the World for July 2017 (see below). 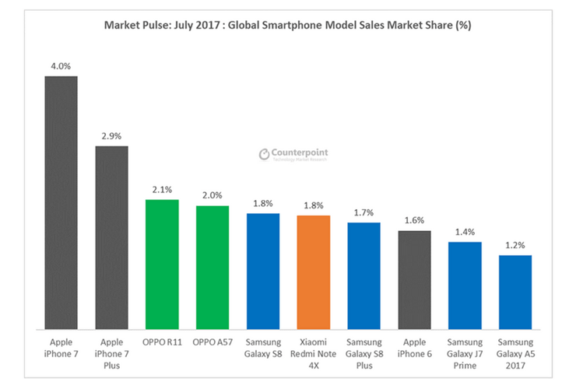 Last month, Oppo announced a retail partnership with Noel Leeming, meaning their smartphones are now available in over 70 Noel Leeming stores across the country. Oppo New Zealand sales director, Terence Tan, was “delighted to be partnering with New Zealand’s leading consumer electronics and appliances retailer”. Tan said that Oppo have been pleased with the response to the smartphones in the few months since the launch of Oppo in New Zealand, and the deal with Noel Leeming will make it “even easier for Kiwis to get their hands on our premium phones at reasonable prices”.

Oppo smartphones are also available through JB Hi-Fi and 2degrees and, as of this week, the smartphone brand has confirmed a deal with PB Tech. Mark Dalton, PB Tech general manager of sales and marketing, said they are “excited to partner with Oppo New Zealand and bring competitive products to market at great prices”. The deal is great for both parties as it allows Oppo to reach PB Tech’s savvy customer base, and PB Tech is happy to be extending their smartphone range, which Dalton says is the largest in New Zealand.

Oppo’s strategy, which is centred around the camera, fast charging, and offline retail, has been reaping benefits for the company as it continues to increase its smartphone sales and market share. Given its strong presence and growth, Oppo is proving to be one of the up-and-coming big players. As a consumer, I say there’s nothing wrong with some healthy competition for our hard earned dollars.