Life After the News Feed: Why Facebook is Shifting to Stories (And Why Your Business Should Too)

The News Feed is one of Facebook’s marque innovations.

Rolled out to users in 2006, it became the go-to place for people to connect with their friends,  share updates about their day-to-day life and enjoy content from brands they followed. Not to mention, it also played a pivotal role in Facebook’s march to advertising dominance.

In life and business, though, change is inevitable. And just as popular culture, music, and fashion move on,  Facebook should too.

For nearly a decade, the News Feed was the jewel in Facebook’s crown. However, over the past couple of years, Facebook has been locked into a battle with misinformation, troubled by privacy issues, and found itself trying to counter a decline in original content (photos, videos, status updates) shared by users. It even admitted the News Feed can have a negative impact on mental health.

This wasn’t the way it was meant to be.

Facebook was meant to help people stay connected with those closest to them. But Mark Zuckerberg has admitted that the platform has underdelivered there. In a post on his Facebook Page back in January the Facebook founder noted:

“Recently we’ve gotten feedback from our community that public content — posts from businesses, brands, and media — is crowding out the personal moments that lead us to connect more with each other.”

And that should be a big worry for Facebook. When the Swiss Federal Institute of Technology looked into what factors can kill a social network, they found that when the bonds between users weren’t particularly strong, neither was the users’ relationship with that network.

The study also found that as networks grow, they become more cluttered, so we begin to miss out on some of the most relevant content from those closest to us. This is most definitely the case with Facebook — and was a key factor in the company’s decision to shift the News Feed to focus more on updates from people, not brands.

“Because space in News Feed is limited, showing more posts from friends and family and updates that spark conversation means we’ll show less public content, including videos and other posts from publishers or businesses.”

The rise of Stories

While the News Feed has been experiencing growing pains, a new format has arisen: Stories.

Since Snapchat debuted the Stories format in 2013, it’s gone from strength to strength and is quickly becoming the default format for content consumption and creation. In total, consulting firm Block Party estimates that nearly one billion accounts are using the Stories format daily and Zuckerberg recently shared that people now post more than one billion Stories every day.

At its annual, flagship conference, F8, Chris Cox, Facebook’s Facebook’s chief product officer, also noted that “the Stories format is on a path to surpass feeds as the primary way people share things with their friends sometime next year.” And Zuckerberg recently added that “it looks like Stories will be a bigger medium than [news] feed has been.”

The shift to stories is coming

From making the status composer default to the camera to encourage Story creation on mobile, to adding Story preview tiles to the top of the feed, Facebook is constantly running tests and experiments to familiarise more of its user base with Stories. 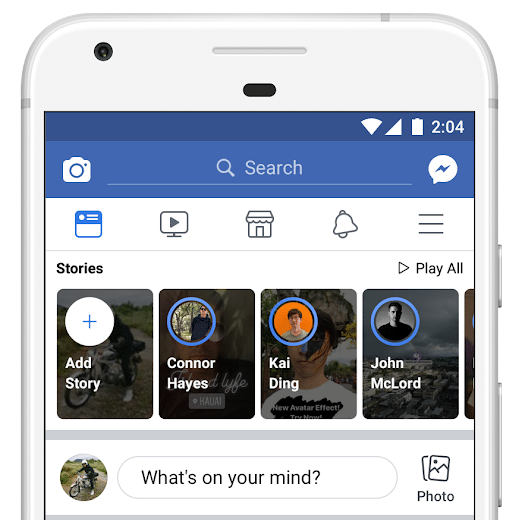 Over on Instagram, 47 percent of users find that Instagram Stories helps them be more authentic in their communication with friends and family, something Facebook would love to encourage on its flagship product too.

In short, it feels safe to say that Facebook is pivoting to Stories. But when your platform is the size of Facebook’s, no change is ever simple.

The roadblocks ahead for Stories

The biggest hurdle for Facebook’s move to Stories is revenue.

“Another challenge is that we’re earlier in developing our ads products for stories, so we don’t make as much money from them yet as we do from feed ads. We’re following our normal playbook here of building out the best consumer products first and focusing on succeeding there before ramping up ads. I’m optimistic that we’ll get ads in stories to perform as well as feed over time, and that the opportunity will be even bigger because it looks like stories will be a bigger medium than feed has been.”

Though Facebook has rolled out Stories Ads, it will need to reinvent mobile video ads for this to be a success. Pre and post-roll video ads within Stories is fine for now, but if Stories are to become as profitable as the News Feed, Facebook needs to think outside the box and develop a brand new ad product from the ground up, like it did with News Feed ads five-or-so years ago.

The second hurdle is ensuring users buy into Stories.

300 million daily active users across Facebook and Messenger is great — it’s probably even more daily active users than Snapchat has on its own Stories (according to data obtained by The Daily Beast). But Facebook has 2.2 billion monthly users and the vast majority don’t use Stories yet. 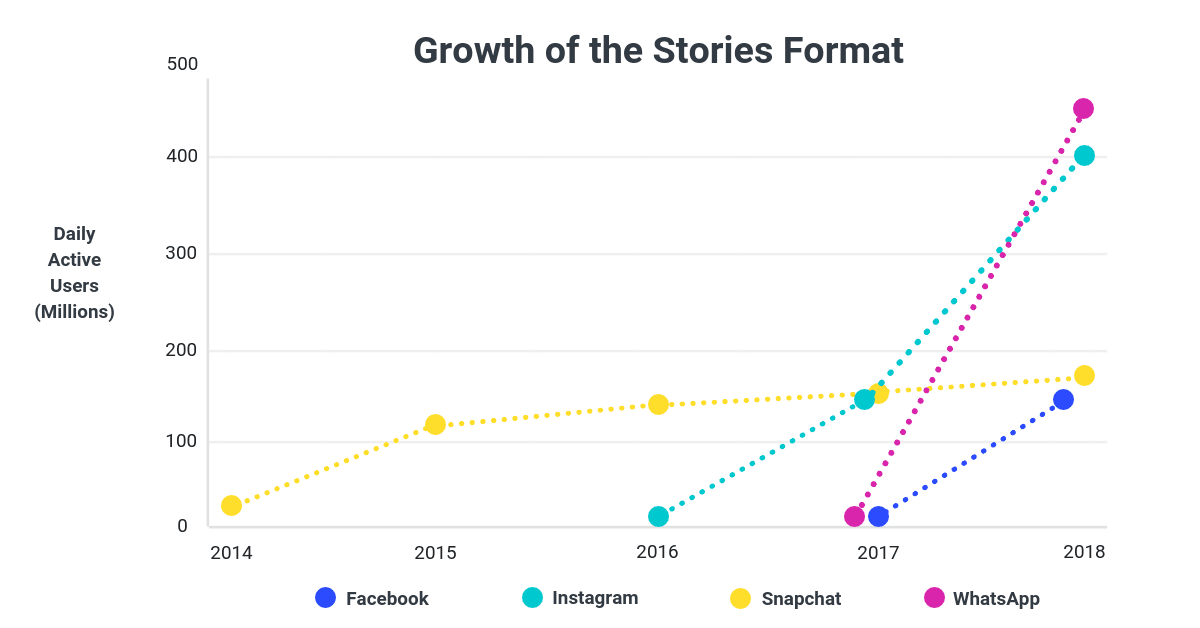 Like it or not, Stories will replace the News Feed

When it comes time to shift away from the News Feed, it’s more likely that users will just have to deal with the hand they’re dealt.

When the News Feed launched, Facebook users had no choice about adopting it, and it wasn’t instantly popular — a group called “Students Against Facebook News Feed” was even formed, reaching more than 280,000 members at its peak.

Despite the pushback, Facebook persisted knowing that no matter how loud or vocal people were in reaction to the change, they would still likely continue to use Facebook anyway.

The same Swiss Federal Institute of Technology study I mentioned earlier found that when left with only two available coping strategies: to accept change or to leave, the vast majority will accept change and continue to use Facebook.

And in a 2006 post about the News Feed, then TechCrunch editor, Michael Arrington noted that: “If this feature had been part Facebook since the beginning, their users would be screaming if Facebook tried to remove it.” Eventually, I believe we’ll look back at Facebook Stories in the same way.

Stories might not be welcomed by all. But one thing is for certain: however you feel about it, it’s time to start preparing for life after the News Feed.

4 ways your business can embrace Stories

Stories are an essential part of a modern social media strategy.

Block Party’s research found that nearly four in five (79 percent) of businesses use Stories on Instagram. Instagram also found that more than one in three said that they have become more interested in a brand or product after seeing it in Instagram Stories.

As the user numbers continue to grow on Facebook Stories, it won’t be long until a large number of businesses start moving to post there too. But we’re not quite there yet.

Here are four ways you can begin to use Stories for your business and ensure you’re riding atop the next big social media wave.

Design agency AJ&Smart uses Stories to provide an authentic look at what’s happening at the business day-to-day and tries to show as much of that in real-time as possible.

For example, in its Stories, you might see behind-the-scenes at a client workshop or the team traveling to a client meeting.

The Guardian also found that, on Stories, “less polished” content performs better than heavily produced videos, so you don’t have to worry about the production quality of your content. Instead, just point and shoot with your phone and focus on creating a compelling narrative.

To do this, tap your profile icon in the top-right corner of Instagram, then open your “Account settings” and choose “Story controls”. From here, tap the switch to turn on auto-posting to Facebook:

Stories ads are a new addition to Facebook’s ad inventory and enable brands to share image-based or short video ads. At Buffer, we started testing Stories ads a few months back and now we’re seeing clicks to our website from Stories for just $0.06!

It’s super simple to get started with Stories ads and we’ve just launched Stories Creator, a simple tool to help you design thumb-stopping images for your Stories ads.

And Stories offers businesses the chance to repost content from their audience at a more frequent pace than in the feed. For example, Kettlebell Kings regularly shares one or two user-generated posts to its feed each day, but by using Stories it can share 10-12 posts from followers.

What are your thoughts on the future of Stories on Facebook? Has your business started posting Stories? Let us know in the comments below — excited to join the conversation.

24+ Sites to Find Free Images You Would Actually Use for Your Marketing Previous post
The Power of Purpose: How Taking a Stand Helps Brands to Win Customer’s Hearts (and Business) Next post

11 of the Best Social Media Analytics Tools (Free and Paid)

How to Use YouTube Live to Engage Your Audience: A Step-by-Step Guide